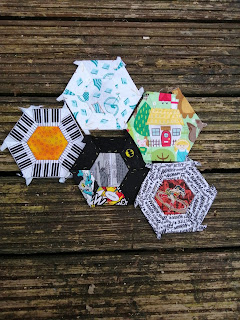 Hello everybody! The theme this month in the focus cutting sewalong was Books.  This was a great theme, I had loads of possibilities spring to mind instantly as soon as it was announced. We own a lot of books. Like a few thousand - no exaggeration. That's what happens when an historian and a publishing professional get married, although we were still students when we married, and we already owned a decent proportion of the books back then. I could have made tons of blocks on this theme, but due to the previously mentioned broken finger, I decided to play it safe, and just make 1 block per week.  It was a 5-week month, so here are my five blocks. The first week, our prompt was identifiable motifs.  For this one, I decided I had to go with the one fabric I owned that actually had book motifs. The overall fabric has a beachy motifs, it also features deckchairs and badminton rackets. But the beauty of focus cutting is you pick a single element to highlight to fit your own theme, whic
Post a comment
Read more 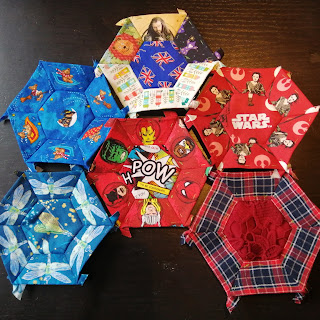 Hello everybody! I am running late on this post, because at the end of February, I managed to break the fourth finger on my right hand.  So even though I managed to make all the blocks on time, typing has been painful, so it wasn't worth the effort of a blog post.  But my finger is recovering quite well now, so I feel up to typing again. February's theme in the #focuscuttingsewalong was 'Getting to know you'. In general, I don't get on very well with more abstract themes, and I  dislike enforced icebreakers. But as the month went on, I got into it a bit more, and in the end I made 6 blocks during the four weeks of February.  The prompt for the first week was 'Home'.  I really struggled with this one as I just found the concept so abstract. I eventually settled for a very mixed bag.  The top 3 half-hexies represent my three children as best I could from my stash. Two of them are perfect, but I need to embroider wings on to the lion to make that one more accu
2 comments
Read more 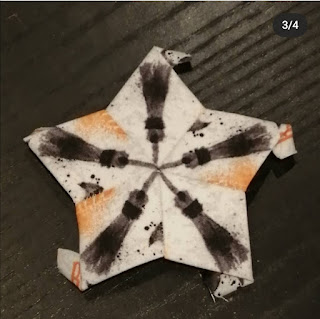 Hello everyone, My Halloween La Passacaglia quilt has been slowly rumbling along in the background, so I thought it would be good to update you all. As I mentioned in my last update , I was feeling frustrated by the lack of fabric available that suited my specific vision for this quilt. However, I then reasoned that not being able to do everything I wanted was not the same as not being able to do anything I wanted, so I have been doing my best to work with what I already have as much as possible. So I expanded two rosettes, and made another rosette centre. And I have been doing several odd-shaped bits from around the edges of the quilt that aren't strictly rosettes, but are needed to fill in some of the unusual shapes created by the pattern. I found a good orange Egyptian mummy fabric on Spoonflower, that is perfect for one of the larger rosettes.   For this one, I wanted to highlight a butterfly type shape within the pattern. Although being as this is Halloween themed, I should pr
1 comment
Read more 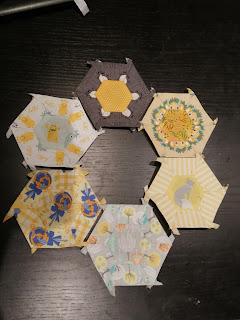 Hello everyone! I am actually managing to keep on top of a sewalong so far this year! The #focuscuttingsewalong (previously known as the #fussycuttingsewalong), is a paper piecing sewalong organised by Naomi Clarke on Instagram. It is now in it's fourth year! I like this one because it's very informal and relaxed, people can join in as much or as little as they like. I have joined in with the previous three years. My ' Fussy Cutting Forest ' Quilt uses the hexagon flower blocks from the the first year (2018) and I am currently working on handquilting it. My ' Fussy In The Sky With Diamonds ' from the second year (2019) is still being pieced - I am adding borders to all the blocks, and I still have 3 or 4 blocks outstanding that I didn't manage to make in that year. Last year (2020) I decided to do one block a week, instead of one a month, and 2020 being the mess that it was I didn't manage to complete even the 12 blocks. I totally do intend to finish
Post a comment
Read more
More posts